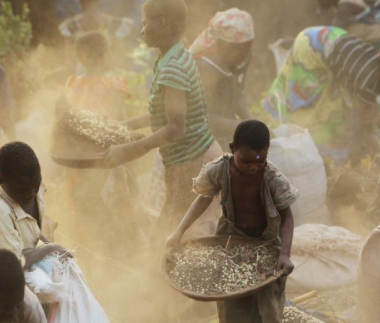 The success and peace of countries mostly depends on how good or bad an individual leader in Africa is. It depends on the individual leader as the head of state and government. To say that an individual leader not the party and how they direct the economy and politics matters is known and not limited to Africa. We can there look at the leadership of Margaret Thatcher vs. Tony Blair in UK, or George W. Bush vs. Bill Clinton in the USA. But particularly for Africa without functional political parties and full liberal democracy, we have to state that the individual matters at a given period of time.

In such economies, the economic political and social policies are closely associated with that individual not the party or cabinet that serves him or her. Therefore such a leader may or may not favour pro-growth policies. They may not get concerned much about population, health and education policies, and may view the role of trade and the private sector differently. We have seen that in Africa regional integration is vital for landlocked countries and also small markets with small and a poor population a population with low purchasing power. However, a leader may not view the role of regional integration positively. Some leaders may prefer more „production of babies‟ as a solution to population numbers. This increases the dependency burden and enhances poverty at family level.

Some recent studies show that the individual characteristics of leaders matter for growth1. The caliber, commitment and personality of the leader also matters. We are saying that the person not the post also matters a lot. This has often been ignored. The person may even find institutions and destroy them. In the study of elites, Barber (1972:3)2, The Presidential Character provides an influential example of the focus on individuals rather than institutions.

He assumes that “who the president is at a given time can make a profound difference in the whole thrust and direction of national politics”. He continues to state that the individual (the president) weighs heavily among other historical factors. While Barber did not undertake a quantitative approach used in most behavioural studies, he examined his subjects in round rather than as a collection of variables. He sought to study the actual behaviour of that individual taking office. He classified (American) presidents on a grid with positive/ negative, and active/passive3.

We have seen that the American history of independence and elimination of electoral and other forms of discrimination are credited to some individual presidents. So this is important. In East Asia, regardless of the level of liberal democracy they exhibited, individual presidents such Lee Kwan Yew (Singapore), and General Park (who took power via a military coup in South Korea) are constantly mentioned for the economic success of their countries. So it right to say that the office of the president shapes that individual but overtime that individual also shapes the office.

In Africa, there is still an elusive quest for leaders with commitment and discipline to change society. Congratulations to the already gone generation of independence leaders mostly Nelson Mandela, Julius Nyerere, Kwame Nkrumah, and Patrice Lumumba for the efforts taken at independence. Most regimes after independence to date have not escaped allegations about tendencies „tribalism‟ in government. The fear is that if you don‟t have close relatives near you (especially within security), you leave State House and President‟s Office soonest. See what is happening in South Sudan. Just the youngest country in the world and ethnicity is tearing it apart. We strongly state however, that it is bad leaders that use the ethnic background for survival. In the long run society resents it, but at a cost.

Leaders are important or useless to economic growth and sustainability. For a long time, economists had concentrated on the sources of growth and ignored that politics also matters. Political leaders have led their countries to prosperity while others to ruin. You can never remove politics from economic growth. Politicians are responsible for political offices and for allocating the budget based on the regime‟s priorities. We say regime‟s priorities because in most cases society‟s priorities, needs and goals fail to feature prominently on budgets of most African countries

In Africa, it appears that the politicians play politics most times. Politics is the process by which a society chooses the rules that will govern it4. Another view of politics is that it is an activity or process by which groups reach and enforce binding decisions affecting the collectivity as a whole5. Rod Hague and Martin Harrop (2010:4) state that the term politics possesses varied uses and nuances but that three aspects of politics are clear. These they present as6:

We strongly believe that Africa‟s main problem is not the geography of being landlocked but of bad leadership that fails to understand the need for friendship and partnership with the neighbours (embrace regional integration). We believe and it was originally established by Krugman7, and later Sachs8 that physical geography can explain the causes of different growth levels in the world –and in our case Africa‟s mainly landlocked countries. Even, Adam Smith in 1776, in the Wealth of Nations, alluded to the fact of African countries possible high cost of transport for international trade9. We are saying that while it is challenge, geography alone cannot explain why African countries are poor: there is poor leadership. Good leadership can work with good neighbours and reduce the costs of transport to the ports and harbours. Sachs (2003) says that poor physical endowments may also hamper development10. In a series of papers, Sachs11 and colleagues have demonstrated that levels of per capital income, economic growth, and other economic and demographic dimensions are strongly correlated with key geographical and ecological variables, such as climate zone, disease ecology and distance from the coast (Sachs 2003:2).

There are countries that are landlocked in Europe that have performed economically well: Switzerland, Austria, Luxemburg, and Botswana in Africa. As Collier (2008:54), being landlocked does not necessarily condemn a country either to poverty or to slow growth. He says that good neighbours matter not only as transport corridors for overseas markets but as markets themselves.. However, 38 percent of the people living in bottom-bullion societies are in countries that are landlocked and it is overwhelmingly an African problem12. Measured in population size, Africa has the largest percentage of

9 Adam Smith: All the inland parts of Africa, and all that part of Asia which lies any considerable way north of the Euxine and Caspian seas, the ancient Scythia, the modern Tartary and Siberia, seem, in all ages of the world, to have been in the same barbarous and uncivilized state in which we find them at present……….There are in Africa none of those great inlets, such as the Baltic and Adriatic seas in Europe, the Mediterranean and Euxine seas in both Europe and Asia, and the gulfs of Arabia, Persia, India, Bengal, and Siam, in Asia, to carry maritime commerce into the interior parts of that great continent; and the great rivers of Africa are at too great a distance from one another to give occasion to any considerable inland navigation. (Smith, A., 1776. An Inquiry into the Nature and Causes of The Wealth of Nations, An Electronic Classics Series Publication, The Pennsylvania State University)

10Sachs, J., (2003), “Institutions Matter, but Not for Everything: The role of geography and resource endowments in development shouldn‟t be underestimated”, Finance and Development. Pp.38-41
11Sachs, J., (2003),“Institutions Don‟t Rule: Direct Effects of Geography on Per Capita Income”, NBER Working Paper No. 9490;

Being land locked is a permanent physical situation that cannot be changed by man. However, man can change policies or institutions and yes he can rule well and cooperate with neighbours. Let us indulge in practical solution for three land locked countries – Uganda, Rwanda, and Swaziland as we explain how those with international water borders can take advantage. We will also look three non-landlocked countries: Kenya, Tanzania, and DRC.

There are no reviews yet.